I have taken 3 hikes testing my gear. All 3 were in North Carolina. Two were on the AT in North Carolina from Fontana Dam and Winding Stair Gap. The first Southbound in April and the other in May. The third one was in the Joyce Kilmer National Forest.

I have one more final test which will take me from just north of the Great Smoky Mountains to a town that the Trail passes through, Hot Springs North Carolina. This last hike will include spending a night at Mack’s Patch. I’ve wanted to experience the sunrise and sunset at this location since my decision to thru hike the Trail. This trip is my final opportunity to evaluate if my equipment works in the field. I will carry everything that I am planning to take next year and afterwards scrutinize each item for what value it brings to the table versus the weight it puts on my back. Each item will be assessed for how well it worked, how it packed, was it used frequently or not at all? Is there something else more suitable? How many miles can I expect it to last? There are many things to consider so I expect some decisions will still be made on the trail.

Which brings to mind the first thing these hikes have taught me. Nothing can be taken for granted and everything may change. Whether it is gear failure, the weather conditions , injury, your mental state, or even energy level. All these things need attention. To ignore them threatens my success. Being adaptable and ready to select the best option is of paramount importance. To be able to do this for 5 or six months will test everything about me. My determination and will, my physical abilities and my mental sharpness. It’s easy to make mistakes when one is not only physically exhausted but mentally as well. I don’t think there is any way to do this without at some point pushing myself to that limit. The trick will be to know where that line is and make a good decision to stop and take care of whatever my body needs at that moment. Whether it be hydration, calories , rest , or all three. Pay attention , be in the moment, know my limits, and take care of myself. I’m asking my body to perform a difficult task day after day. I trust that if I respect that fact I have a chance to succeed.

So what else did I learn. On the first hike I wasn’t able to enjoy the scenery as much as I’d hoped. My concentration was solely on navigation and managing my resources, especially WATER! I began a steep and long climb with the first steps out of the car. Looking back at my journal notes I called it a tough , tough climb. It was hot and there were no leaves yet on the trees. The higher I climbed the more the noon sun heated up. I failed to think about sun screen when packing and was lucky to avoid a serious sunburn. Lesson learned. I started with 2 liters of water. Thinking this would be enough I passed on the first chance to refill. An hour and a half later I only had a little more than half of a liter. I needed to stop and rest but l didn’t. 15 minutes later needing a drink I did anyway and took my pack off. I wasn’t sure how far it was to the next water source so I chugged half of what was left. I checked my guide and estimated in a half mile I could refill my 2 bottles. Hiking on I continued to climb another 250 ft. where I found a small stream with plenty of good cold water. I rested and ate an energy bar. I still had almost a mile of climbing and 3 miles until Cable Gap Shelter where I would spend the night. Which also would be my next chance to get water. It doesn’t sound like much but reaching that water, plus the little break and snack helped my confidence and my energy level! I have learned to fill up at every available source or at the very least consider carefully the next few hours ahead.

Something about miles. I drive 10 miles to work each day and I believe that my mind equates that to 30 minutes or less because that has been the norm for most of my life. The grocery store is 5 miles, 10 to 15 minutes. So when walking up and down mountains, over rocks and around trees with weight on your back , my brain has a hard time adjusting. A good example , on one occasion nearing lunch time , there was a shelter up ahead which was a half of a mile down a side trail. I was hiking with somebody and we decided to go there to eat. In my inexperienced mind a half of a mile didn’t seem far. We walked to the shelter and after lunch walked that same half mile up hill back to the trail. Never again! That was at least an extra 30 to 45 minutes of uphill walking. A mile on the trail is a long way. I have seen shelters on the map showing the water source located a half mile downhill. These are the types of things that become important when making decisions on the trail.

I learned about shelter etiquette. It’s really about sharing space with people you may not know. Just be considerate and accommodating. In short just respect each other. That’s not hard though because people on the trail are amazing! There are a few who seek more solitude. I do as well at times, so you give them space. But I was out there learning by observing others, listening to their conversations and asking many questions. All of the hikers patiently gave me advice, encouraged me, and wished me well next year. Older, younger, male and female, from all walks of life and political persuasions. We were all out there trying to accomplish the same thing. It was a loosely knit community of like-minded individuals. Almost an extended family. In fact some bonds are so close that individuals will hike together for weeks or months. They develop intense bonds because of the unique conditions faced on the trail along with the common goal of finishing over two thousand miles. I was only out there for a comparatively short while, but I witnessed it. I am looking forward to next year when I too will be a thru hiker experiencing all the trail has to offer. I began these hikes knowing very little of what to expect. As a result, I learned a tremendous amount of valuable information. And yet each day on the trail brings new situations. Some of them I’m ready for and others I’ll have to face for the first time. I for one humbly approach this journey as a novice, seeking to grow in understanding of a life and world seemingly far removed from where I am today. And yet it is merely a continuation of a quest that started many years ago. The theater will be different, the effort extreme, but the experience immensely more focused and mindful.

Highlights of the trips include that first climb from Fontana Dam. My daughter Stephanie and grandchildren dropped me off at the trail head. In the first hour I questioned whether I was going to make it to the top. I did and then wondered whether I would be the only one at camp.

To my surprise, I met more than 15 people at Cable Gap shelter. Most were thru hikers. That night while still in my sleeping bag, I opened my eyes to a clear sky and the moon shining bright in the open door of my tent. I also heard an 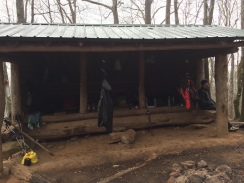 owl early in the morning. The next day took me to Brown Fork Shelter. Along the way I hiked through the largest spread of white trilliums I’ve ever seen. That night I slept in the shelter because of a coming storm. The wind blew hard and rain fell harder. I slept good!

At Winding Stair gap I hiked with Jeff, a new friend who had been on the trail the year before. I learned the value others bring to a tired spirit. The energy of each other can be shared, keeping spirits up and more miles covered. The view at Wesser Bald was nothing short of amazing. I saw a huge timber rattler just off the trail. He warned me, and I listened. I met a 5-year-old girl and her mother who had hiked 130 miles. They planned to be out 3 more months. A 68-year-old man and his 45-year-old daughter. I met people from Germany, Australia, England, France ,Spain, Canada, Holland, and Israel. I walked all afternoon in rain for the first time. I won’t lie, I didn’t like it, but I’ll have to learn to at least accept it. I got a little taste of the trail and came away wanting more. I’m not kidding myself, I still don’t know all I need to know but that is what an adventure is all about! The journey and the adventure continues… Next stop Hot Springs North Carolina!

6 thoughts on “What I Learned From 3 Test Hikes”