It’s late but I won’t be able to post again until Easter weekend. First of all thanks for your interest and support. Many times each day I use that as motivation to keep moving north.

I’m not sure what form these posts will take. I’m still learning how to navigate the days I get to a town. Today for instance, I was a little late getting to Angels Rest hostel and now it’s 8 o’clock. But like life on the trail, this blog is a work in progress. Well get there.

So here’s a capsule of what I experienced.

Day 1 Trents Grocery. Thanks to my daughters for dropping me off. It was hard on all of us and you could tell we were stalling a bit. I because the point of no return had arrived. It was put up or shut up. Those first few steps were full of mixed emotions. The immediate climb didn’t make it easier. It rained on and off but light enough not to need a rain coat. Thankfully the terrain leveled off pretty quickly. I made it to the shelter in good time arriving damp but in good spirits. There were 6 people there. Two married couples. Better Together (they took one trail name), Muffit and Johnny Walker. Hugs, a retired marine, and No Collar who started 3 weeks ago in Damascus Va. All really great people who had good advice and even better friendship. Eventually 5 more people arrived. I stayed in the shelter as a storm was predicted but we only had a shower late that night.

The next night though was going to be worse and was it ever. I had a plan of doing 10 miles to the next shelter and then 7 into Pearisburg. I didn’t want to pitch a tent with the combination of high winds (40 mph),low temps , and hard rain. As late as I would get to the shelter there would be no guarantee I’d have a spot. So I flipped my days and did the seven miles on the 2nd day First making a reservation at Woods Hole hostel. I got the last reservation. What a lucky day. The storm was bad as expected and I had a bunk, shower, and two home cooked meals. There were twenty two people there. Including my friends from the previous night. We all shared stories furthering our friendship. Hopefully I’ll see them later down the trail.

Day 3 Got off to a bad start as I left the hostel with no water. I filtered from a questionable water source just off the road. It was cold and blowing wind, not to mention spitting snow. The climb wasn’t too bad but I was hurrying because No Collar was ahead of me and we planned to meet in Pearisburg. I never did catch him but stopped for a snack at Docks Knob shelter. Hot Cakes a section hiker from Canada was there eating lunch. We chatted a few minutes while eating and then I headed out to Pearisburg. Spring hasn’t really started here yet and the flowers are ready to bloom. I saw massive hillsides of a single flower but only a few had bloomed. It was beautiful! The trail turned into a ridge walk which is very pleasant. The downhill though was quite different except for another huge mass of flowers. The rain from the previous night changed the trail into a 2 mile a river. Nothing to do but walk through mud and water and try not to slip or worse fall down. Finally got to Pearisburg which is .7 miles down a road from the trail but didn’t have No Collars number. I figured I’d just get a motel or call Angels Rest hostel to see if he was there. Before I called a lady stopped her car and asked where I was heading. She told me she owned the hostel and No Collar had paid for my reservation. It was the last available bunk. That is what the Trail is about. We went out for Mexican Food after a needed shower. All in all things have gone well but I’m still learning not to mention getting trail legs! 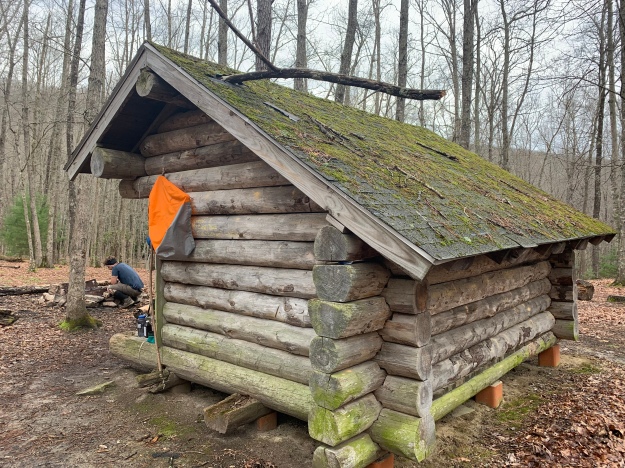 Notice the branch through the roof.

Foggy morning before the storm 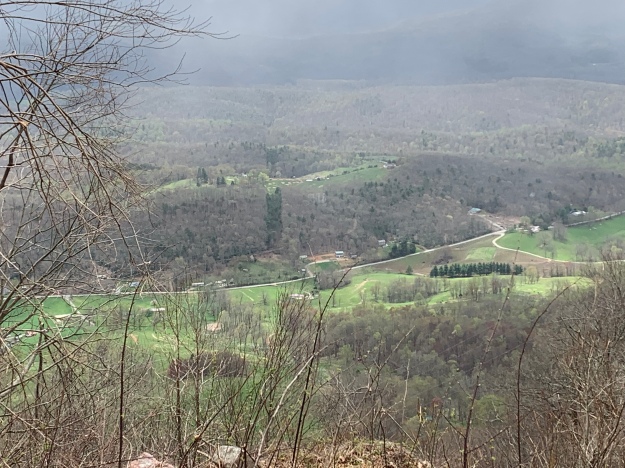 View from the ridge walk 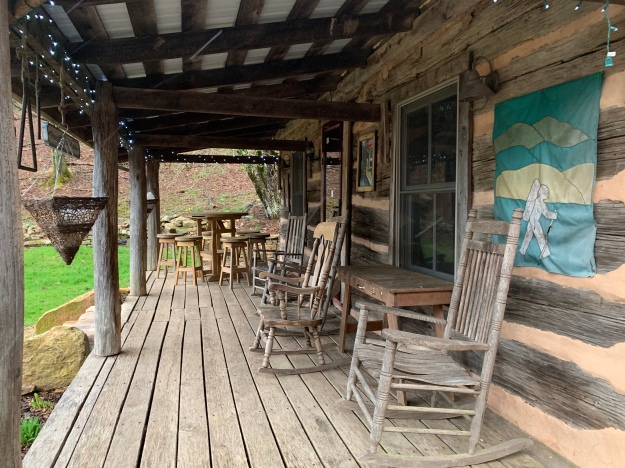 Doesn’t show it but it was cold,windy, and at times snowing At least it wasn’t raining..